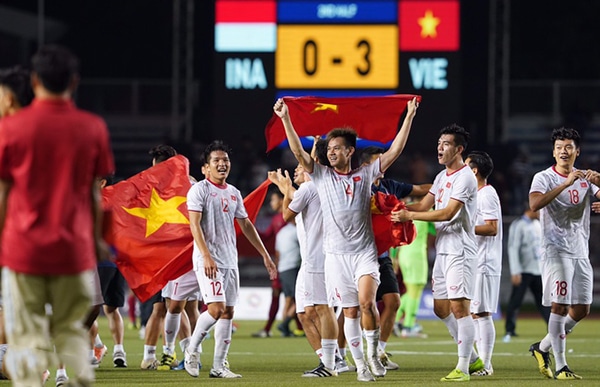 Over the past two years, since coach Park Hang Seo took the lead, the Vietnamese national football team has achieved many unexpected results which surprised fans and made the country proud.

With such impressive performance records, in addition to salaries and salary allowances (such as accommodation, meals, telephone, etc.) football players receive monthly from the clubs where they join to practice (this amount will depend on the tournaments the club participates in and the role of each player in the team) and have labour contracts (“Labour Contract“) with (“Clubs“), when joining the national team after receiving a call-up, they also receive additional remuneration from the Vietnam Football Federation (“VFF”). In addition, the players also receive bonuses divided from whole team awards or those given specifically to themselves in the form of assets such as money, securities, real estate, cars, etc.  and other benefits such as airline tickets, gym membership cards, entertainment club membership cards, vacation packages, etc. from various sources such as the Organiser, Vietnam Olympic Committee (“VOC”), Vietnam Football Federation (“VFF”), and other domestic and international organisations and individuals.

Do not forget to mention the profit from the transfer transaction that the other Club has to pay the players in order to have transfer agreements with them. In addition, players can also be paid for participating in advertising products as well as earning from social networking sites such as Facebook, Google, and YouTube. The more popular they are in front of the public, the more they can earn from social media.

Thus, with various sources of income from salaries, bonuses, gifts, profit, etc. as above, it can be said that members of the Vietnamese football team are among the top earners today. Currently, after a lot of football tournaments, football fans are often concerned about how the players, especially the male players with such high income, will register, declare and pay personal income tax (“TNCN”).

To answer these questions, consider whether the money that a player earns is taxable income in accordance with Vietnam’s current provisions of the personal income tax? If it is taxable, it will be subject to the partially progressive tariff (according to the principle of the higher income, the greater the tax) or the whole income tariff (only pay a fixed percentage of income).

First of all, it is necessary to consider whether the players will be considered resident or non-resident individuals pursuant to Vietnam’s law on tax as each subject will have a different tax calculation.

With the example that, except for a small amount of time traveling abroad for international tournaments, the players are either: (i) regularly present in Vietnam for more than 183 days or more in a calendar year or 12 consecutive months from the first day of their presence in Vietnam; or (ii) having a regular place of residence in Vietnam, including the case of regular residence under the law on residence of Vietnam or having a rented house to stay in Vietnam so they will be considered as Vietnam’s residents.

When a player is considered as a resident, there are two ways tax calculations can apply to them. Accordingly, if their labour contract signed by them and their clubs has a term of 3 months or more, the income from their salary will be taxed according to the partially progressive tariff.

If the labour contract has a term of fewer than 3 months, it will be taxed according to the whole income tariff at a rate of 10%. In fact, the majority of players sign a labour contract with clubs according to the football season and usually, the labour contract has a term of more than 3 months, except for a few special cases, where some players are loaned by other clubs for a short time when that club suffers a sudden shortage of players due to injury, illness or serious deterioration.

Next, with the exception of a few good players who are playing for foreign clubs that will be considered non-resident individuals, most of the players are Vietnamese resident individuals. Let’s see how their earnings will be taxable.

For their salaries, which are stated in the labour contract, they will be considered as income from salaries and wages and will be subject to TNCN in accordance with the partially progressive tariff from 5% to 35%. Next, for accommodation, electricity, and water, it is necessary to distinguish between: (1) Club’s houses, apartments or directly rented by the club; or (2) Allowance for housing directly payed to the players so they will take care of the accommodation themselves.

In the case of (1), if the club owns a house for players or is named in the rental agreement and directly pays the landlord, the rent will still be taxable but limited to a maximum of 15% of the total taxable income of a player’s salary.

However, if the house, electricity, and water are contracted by the club and they give the players cash to take care of it themselves, the entire allowance will be subject to TNCN according to the partially progressive tariff as mentioned above.

On the other hand, the lunches provided by the club will be tax-free but if the players are given money to take care of their lunch, the amount will not exceed VND 730,000/person/month under Article 22.4 of Circular 26/2016/TT-BLDTBXH of the Ministry of Labour, War Invalids and Social Affairs, effective on October 15, 2016. The excess (if any) will still be taxed according to the partially progressive tariff as above.

Thus, it can be inferred that for breakfast and dinner in the case players are called up to spend a long time at the club, whether free meals or cash for meals, they are all subject to TNCN in accordance with the partially progressive tariff.

However, the player will be entitled to deduct taxable income from statutory deductions such as the deduction for the player himself up to 9 million VND/month, or deductions for dependents such as children or parents where, if registered and satisfying certain conditions, each dependent can receive a reduction of up to VND 3.6 million/month.

Next, for the bonuses that players receive for their performance at tournaments from the Ministry of Culture, Sports and Tourism, VOC, VFF, People’s Committees at all levels, FIFA, Asian Football Confederation (“AFC”), and other domestic and international organisations and individuals, it’s necessary to distinguish between two cases as follows:

For bonuses from FIFA, AFC for football prizes recognised by Vietnam (if any), Official Letter 1324 / TCT-TNCN of the General Department of Taxation of April 16, 2018, guilds VFF that these bonuses are non-taxable.

For bonuses from the football club’s owner, the player who receives the bonus will be taxed according to the partially progressive tariff as this is an income considered as salary or wage. For the prize given to all the team by the club divided among each player, the player is also taxed for that portion of the money in accordance with the partially progressive tariff. However, cash bonuses from other domestic and international organizations and individuals which are accidentally given to the player after their achievement in the match are not considered as amounts of salaries and wages and they are not subject to TNCN as well.

If the value cannot be determined in the above ways, the local tax authorities will be based on the registration taxable house price set by the Provincial People’s Committee; for other types of property subject to ownership registration, such as cars, motorbikes, and yachts, the value will be determined based on list of base registration fees set by the Provincial People’s Committee at the time of the registering ownership rights.

Note that if the gift is taxable from abroad, the player must pay taxes such as import tax, value-added tax (“VAT“) and special excise duty on certain specialised properties when importing. In addition, these taxes will be deducted when calculating taxable income.

Thus, other rewards such as phones, TVs, health care services, entertainment club memberships, airline tickets, and tuition, are not taxable.

In addition, Clubs previously payed for the change of hands money under the term “contract signing fees”, i.e. fees for transferring players to other clubs before their contract expires. In fact, in most of these cases, the value of the contract is not made public nor written inside the contract, usually being paid in cash.

The new club does not account for these expenses, so whether or not the players make a tax return is still a discussion. In the event all fees are declared pursuant to Law on TNCN, taxable income from salaries and wages is determined by the total salaries, wages and other incomes of wage or remuneration nature received by taxpayers in the tax period.

Therefore, this fee will also be considered as a kind of taxable from salary and wages because the player and the club have just signed a labour contract, so this amount will be taxed according to partially progressive tariff from 5% to 35%, while not being subject to the total tax rate of 10%. The latter only applies to cases where the two parties enter into a service contract or labour contract of fewer than 3 months.

Football players advertise products or services of an organization and receive remuneration for this activity. That organizations withhold 10% tax on the income before it is paid to the player

Lastly, according to the current tax regulations, the amounts paid by foreign networks to players will be subject to two kinds of taxes. Accordingly, if a player has a business income of VND 100 million/year or more, he or she must pay the personal income tax and the VAT.

Because most of these foreign networks do not have a commercial presence in Vietnam, they do not have a tax code and therefore it is not possible to deduct taxes at source. Therefore, the players must voluntarily go to any district tax office where the player is resident or temporary to register, declare and pay taxes.

In conclusion, Vietnam’s current tax regulations are generally sufficient to ensure compliance with the players’ tax registration, declaration, and organisation’s tax deduction from income-paying. Only cash bonuses and other benefits from domestic and international organisations and individuals (this figure is quite large) are not subject to TNCN and will need to be considered to add in the Tax regulations in the near future to help ensure equality of tax obligations between high-income players and other taxed subjects.

Question 115: In a divorce case, which case could lead to an on-the-spot appraisal request to the Court? Does the appraisal require prior notice?...

Question 114: In a divorce case, in which circumstance a spouse has the right to request the Court for a health or axit deoxyribonucleic...